I was pretty sure I had invented all those words, but that’s not the case. Covidiocy refers to people who make inane statements or perform inane actions relative to covid-19. Covidity refers to having a proclivity toward respecting the guidelines for slowing down the spread of the virus. Covidity has its own Facebook page. Covitality predates covid-19. It is a kind of therapy for adolescents (especially). It phonetically contrasts with co-dependence. In Person vs. Automobile, however, I give it a new meaning.

The facts do keep shifting concerning the virus, but that does not exculpate conspiracy theorists concerning covid-19. The theory that comes to mind is the one that states the threat is manufactured by the US or a consortium of governments. I’m thinking of Tony Spell, a pastor in Louisiana, who said, “The virus, we believe, is politically motivated.”[1] If I thought my faith could keep 1,000 people safe from the virus, even though that’s a tall order, I guess I’d keep meeting with them, as he has been even after being cited on six counts of violating the governor’s executive order.

There’s a bitmapped message floating around on Facebook that generally seems to be posted to show that the covid-19 threat is minor compared to well-known causes of death. Generally, I like that approach: we often fear the unlikely dangers while we ignore the most likely danger. While a fear of flying is involuntary, it was the drive to the airport that put us on the statistical radar.

However, I decided to check the sources for this info graphic, since some of the causes of death (starting with the beginning of 2020) seem dreadfully high (and they are). But in the process, using the same source, worldometers.info, I compared the 2020 world-wide-death-count numbers as of 4/2/2020 with those of the 3/25/2020 info graphic (an additional 8 days). The count of ALL of the causes of death was 109% greater except covid-19, which was 249%. 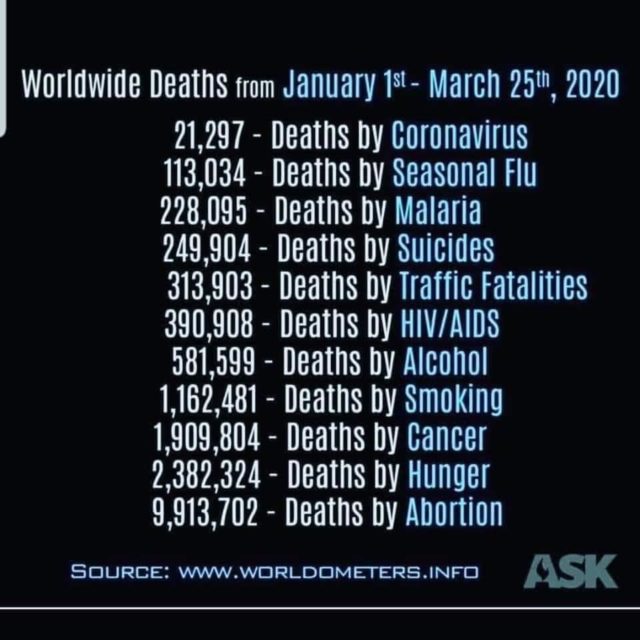 Here’s my comparison (except I couldn’t find hunger statistics):

It is this rate of covid growth that concerns epidemiologists (but not perhaps conspiracy theorists).

Not every pastor—in fact very, very few—has ignored the mandates and recommendations to avoid public gatherings. Take my sister, for example. She resides in Oklahoma as a Methodist pastor. Oklahoma is among the five states that had, as of April 3, done the least to prevent social gatherings.[2]

She, herself, is a woman of faith, but she doesn’t take chances. After her husband returned from a trip in his automobile that required him to leave the state, she quarantined him for 14 days just to be safe. (Don’t read too much into this!)

In my peer group, I occasionally hear millennials dismissed unfairly through a kind of bigotry and over generalization. This irritates me because when I dream at night, I’m usually a millennial by age. It also irritates me because in several respects, millennials are on top of their game, including recognizing a social threat when it wanders into town. My daughter and her husband returned from China (and Paris) only to find Colorado becoming a hot spot. They quarantined themselves for 14 days. When we took our first carefully distanced walk, they were quick to note how I and a few other, older passersby failed to cover our mouths when we coughed. Kudos, sharp witted millennials.

Covitality, as I use it, refers to the hidden physical opportunities during this time of distress. No doubt, many of us breathed a (perhaps contagious) sigh of relief when Governor Polis issued the order to stay at home. It of course allowed for essential services, such as liquor stores and dispensaries, to remain open. That was nearly a given. But it also allowed for going outdoors to exercise at a safe distance.

Meanwhile, the amount of drivers on the road subsided drastically. First in China and now in places such as San Francisco, the air is becoming notably cleaner.[3] Los Angelas has now cleaner air than it has had since World War II.[4] Similarly, the number of car accidents is plummeting.[5] Finally, life is quiet. In fact the earth is quiet, allowing seismographs to detect smaller earthquakes.[6]

While the cause for this freedom from traffic is truly awful, the result has been heralded by bicyclists, runners, and pedestrians as a long-sought advance in society. I used to seek the trails to avoid cars, but now I seek the empty roads to avoid all the people on the trails.

A friend of mine who (like many) cannot visit her aging parents and who has had to learn to teach her students online—in other words, who is paying a price for the pandemic—remarked to me that she thought it good that we have to slow down. She hoped—as I do—that when the virus subsides some of the good habits it caused us to acquire will not.

Closing with a video as I often do, here is one from Don Bushey (who authored a post about almost dying on his bicycle) that might cheer you up:

[1] He’s quoted in an online site, Reason, which, quoting Christianity Today, provides this: “The virus, we believe, is politically motivated,” pastor Tony Spell told CNN affiliate WAFB. “We hold our religious rights dear, and we are going to assemble no matter what someone says.”

[2] According to an April 3, 2020 article in the Guardian, Which states have done the least to contain coronavirus?, the states are Alabama, Arkansas, Mississippi, Oklahoma, and Missouri.

[3] The stunning impact of COVID-19 social distancing on air pollution.

[5] See, for example, Traffic collisions are plummeting in several US cities and Car crashes down by 75% in Phoenix metro area as COVID-19 pandemic continues.

[6] According to this article, the Earth has quieted down to the level normally reached on Christmas day: Coronavirus lockdowns have changed the way Earth moves.

Quotes & Notes
"America is awash in parking. The codes that regulate street parking and parking on private property are different: the former is usually an aspect of the municipal traffic code, the latter the building code. However, they work in tandem to lower the price of driving. Since cities (and indeed regions) do not have a fixed number of car trips any more than they have a fixed amount of any other activity, lowered prices affect decision-making. This is the theory of induced demand"—Gregory Shill, "Should Law Subsidize Driving?"