Crossing the street should not be a death sentence. (Richard Retting, quoted in Denver Streetsblog)

I am capable of hitting a pedestrian or bicyclist or wheelchair in a crosswalk. I am capable of driving away, hoping I’m unnoticed. Both those events are unlikely, but I am capable. Whether as a victim or a victimizer, I can always say, “That could’ve been me.”

About a week ago (July 25), approximately a half mile north of Washington Park in Denver, a woman, Alexis Bounds, was hit by a vehicle while riding her bicycle. She was taken to the hospital, but died. According to one source (KDVR), “The driver of the car, David Anton, was allegedly driving roughly 20 mph when he made a right turn and failed to yield to the cyclist, who was riding in a designated bike lane.” The driver was cited with “careless driving resulting in death,” which carries with it a penalty of 12 points, resulting in losing one’s driving license.

The “car” was a dump truck or garbage truck (reports vary). The victim was a mother of two young children, one of them a new born. The mother had taken a break from biking while she had been pregnant. This was her first day back on a bike, and she rode to Washington Park (Denver Post).

A witness at the scene, quoted in another source (the DenverChannel), said, “We tore our shirts off and tried to rip them up and start some tourniquets . . . and just comforted her and tried to keep her conscious until the fire and paramedics could get there.” A bicyclist, Joshua Garrity, was interviewed about the street where the woman was hit. While he normally “feels safe” in that area, he aknowledged “‘That could have been me.'”

A few days before the Denver fatality, an experienced bicyclist, “Andrew ‘Bernie’ Bernstein, 34, was biking west on the right shoulder of Arapahoe Road near Legion Park [in Boulder] between 4:30 and 5 p.m. July 20 when he was hit from behind by a vehicle” (Daily Camera, Aug. 1, 2019). He was reported as being critically injured but stable. The police now believe they have a photograph of the vehicle that hit Bernstein without stopping after the accident. Bernstein’s brother said the bicycle “was snapped in half,” making it hard “to believe the driver did not realize they had hit someone.”

A Hit and Run makes the drivers who stop after hitting a victim appear virtuous. And they are in that respect. I assume that many hit and runs result from drivers who are intoxicated, high, or otherwise likely to find the charges against them compounded if they are interviewed by the police.

I have a friend who recently remarked that a climber falls fatally from the Flatirons above Boulder every other week. While that’s clearly not the case,[1] a biker or a pedestrian in the Denver area gets hit by a car every day on average, and one of the victims gets hit fatally about every other week.

According to a February 2016 report on bicycle accidents published by Denver Public Works, in 2012 there were 322 crashes (p. 6). A crash is defined as an accident involving a fatality or more than $1,000 in damages. That is nearly one serious collision between a motor vehicle and a bicycle each day in the Denver area.

Between 2008 and 2012, only four collisions resulted in fatalities (two of those being hit-and-run events), putting Denver at that time among the safer cities for fatalities (p.6). However, that number has risen drastically. “The recent deaths continue a terrible pattern. In 2018, Denver counted six bicyclist deaths….” (“‘Stop killing us’: After a deadly month, Denver cyclists will swarm streets”.

A parallel report focuses on pedestrians involved in collisions with motor vehicles. It uses the same criteria (death or over $1,000 in damages) (Pedestrian Crash Analysis, October 2017). In 2012 there were 215 collisions, 23 of which were fatal.

When a fatality or critical injury results from an accident between a bicycle and a motorized vehicle, a “ghost bike” is put at the scene of the accident as a reminder that a life was lost or severely damaged by the incident: 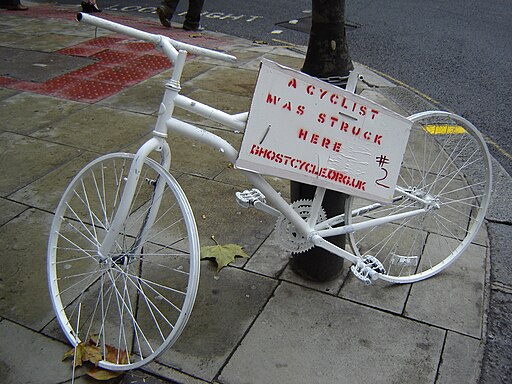 One of my coworkers was killed when a truck hit his bike on Valmont Road (Boulder). When I visited the intersection, a ghost bike was there. Once you’ve seen a white bike in that context, you never want to see another.

[1] I did a cursory search for climbing deaths in Boulder County and found only two for this year: one at Boulder Falls and one in Eldorado. The Eldorado climber was free soloing. Most climbing deaths result from free soloing (we cannot all be Alex Honnold, nor should we be) and scrambling (“hey, I’m out hiking but I think I could climb that…”). Concerning the Flatirons, there was a non-fatal fall this year. You can watch a video from this climber who had his camera on when he fell (while scrambling).