[Laura, one of my daughters, was hit by an SUV at night in a flashing-light crosswalk in Boulder, CO in 2007. The incident could have been much worse (if she had walked just a bit slower). To those of us who were nearby when it happened, it was quite upsetting. To her, it was more than that. In this post we now read her account, the account of the person vs. automobile. — Louis]

Musings of Family, Prayer, and Trauma

After something like that it’s only natural to reflect, retrace, and wonder why it all ended up okay. Indeed, more often than not things seem to end up okay. That’s a miracle in of itself.

It happened on a warm summer evening. I remember leaving Brewing Market with two of my sisters, Mindy and Amy, and my dad (who got in his car to drive home). My sisters were ahead of me. We were walking across Baseline Road to the University of Colorado for something, which, for the life of me, I can’t remember.

I saw them safely get across. Once I was well established within the white lines with the amber lights in the crosswalk still flashing, I looked down at my phone (a fact I shamefully left out of the account until this moment). The next thing I remember is the sound of people shouting, and then the thought, “why I am sitting here on the curb, on the Brewing Market side of things?”

There seemed to be people all around me, but it was moments before anything was clear. I can still hear the words of my protective sister’s fearful voice, “Fuck! Fuck! Fuck!” I think I said something like, “It’s okay. It was no one’s fault,” as I slowly fit the puzzle pieces together. A car must have hit me. My sister must be mad because she loves me. The woman who looks worried must have hit me. My dad is here now, too. He is talking to an ambulance driver. I remember declining a ride, and their insisting that I go to the ER nonetheless. My dad took me to Boulder Community Hospital on Broadway, and my sisters met us there.

In the meantime my dearest mother had been contacted, of course. And, of course, as any dearest mother would be, she was concerned and was on her way to see me. No sooner did they tell me she was coming than did my sisters make their conspicuous departure. If you are adult children of divorced parents then you will understand my horror. You see, my parents divorced about six years prior to “the incident.” In an effort to avoid over sharing on a public World Wide Web post I’ll simply refer to the quote at the beginning of this section, “dysfunctional family is redundant.” And even though my sisters left me constrained to a hospital bed, everything ended up okay. My parents took turns visiting me and waiting in the waiting room. And in that moment was reinforced what I knew to be true since I was a baby: My parents love me. I wish every child could say that. There would be way fewer walls and wars if that were the case.

“I have come to the conclusion that human beings are born with an innate capacity to triumph over trauma.” Peter Levine

Peter Levine, clinical psychologist and expert in somatic experiencing, recalls in his book, In an Unspoken Voice: How the Body Releases Trauma and Restores Goodness, the day he was hit by a car in a crosswalk. In the book he carefully recounts what he believes prevented him from developing post-traumatic stress. Listening to his experience immediately brought to mind my own body/car encounter that occurred years earlier. Through recalling my experience, his thesis, that humans have an innate capacity to heal, solidified as truth within me. This truth overwhelms with gratitude.

“And those who know your name put their trust in you, for you, O Lord, have not forsaken those who seek you”. Psalm 9:10

I’ll need to listen to Levin’s book several more times before I have some grasp of the physiological and neurological response to trauma that can prevent and heal post-traumatic stress symptoms. But what I do know is that I walked away from the crosswalk without more than a sore hip.

Later my dad, and spiritual mentor, told me he had been praying for me. He said he believes that trusting in God will result in health and healing. Prayer has been a baffling concept for me since I was a young child. And while I still don’t understand it, I still practice it. I believe that that night the innate capacity for the body to heal itself, the loving support of my family, and prayer, are inseparable concepts. Like a chemical compound each element interacted to form a new substance: resilience.

[And so Laura went on to traverse mountains, not just crosswalks . . . 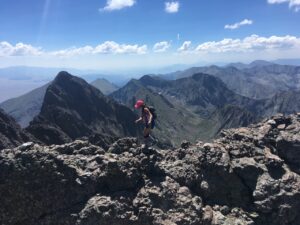 Next post will be a continuation with the city’s response to this and other crosswalk accidents.]

person-versus-automobile
Quotes & Notes
"Thus, in three of the nation’s five most populous states—California, Florida, and Pennsylvania, with nearly 75 million residents among them—the mandatory level of insurance for bodily injury is unusually low, between zero and ,000. However, even the most protective rules are clearly not designed to protect pedestrians. A payout of ,000 is unlikely to compensate for hospital bills, lost wages, pain and suffering, and other damages inflicted on an unprotected pedestrian by a vehicle. The surge in pedestrian deaths in an SUV- and distraction-heavy environment underscores this disparity."—Gregory Shill, "Should Law Subsidize Driving?"